The world population in 2019 was 7.57 billion people. The median age is an indicator of the population age distribution that defines the population age middle point; above which there is the same number of older people than the number of younger below it. According to Ritchie and Roser (2020), the global median age has increased from 21.5 to over 30 years between 1970 and 2019. The classification by age provided by the U.N.’s Population Division shows that by 2015, 26.14% are younger than 14 years, 8.29% are older than 65, and 49.38% are within the working-age group between 25 and 65 years old. The extremes of the world median age spectrum are represented by Japan and Nigeria with the oldest and youngest median age indicators, 46.3 and 14.9 years respectively. In terms of socio-economic development, advanced economies have a higher median age than in developing countries. In advanced economies, there are also lower fertility rates and longer life expectancies than in developing and less developed countries. 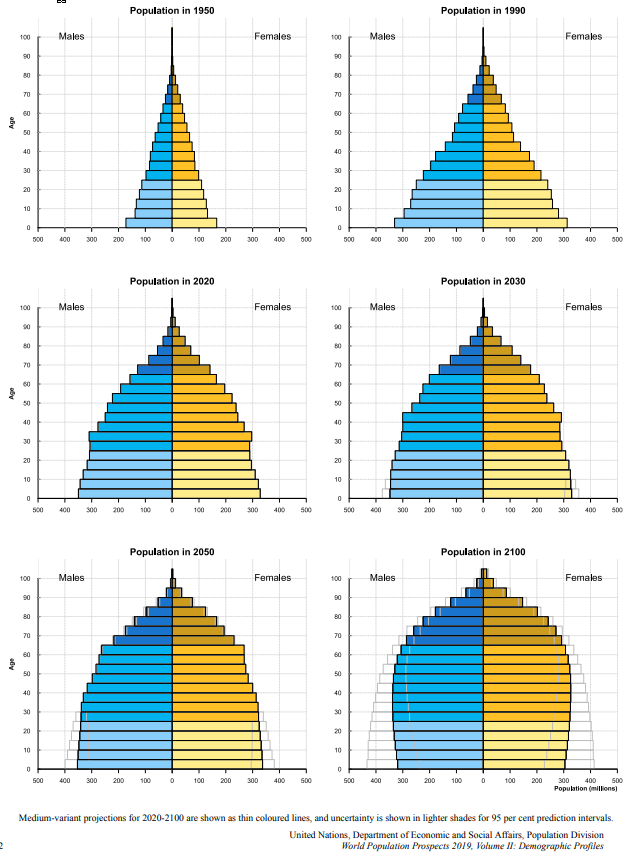 According to the analysis of the global population pyramid available in the study “Age Structure” published online at OurWorldInData.org, the world is experiencing a whirling point in global population accounts. During the period 1950 to 2019, the entire pyramid enlarged. The number of children raised, increasing the world population. The scarce increase in the number of children will start to decline, and the working-age and old age people will upsurge. As mortality falls with the improvement of healthcare, the expected life expectancy for current generations is the highest ever to be achieved. Then the current worrying phenomenon is not the base broadening, but a ‘jam-pack’ overhead the base. The current demographics transits from young to older populations. For the first time in history, in 2018 people older than 64 years old exceeded those under 5. This is how the age pyramid structure becomes a box shape.

ISR Center - October 6, 2021
An analysis of a group of researchers and teachers from the Department of Didactics and School Organization of the Faculty of Education of Bilbao,...

Researchers from the University of Cologne discover a common mechanism for...

A game that enhances intergenerational bonds

Age Discrimination Is Bad — for the Bottom Line

ABOUT US
To contribute to the expansion of knowledge in intergenerational matters, by formalizing its breakdown into specific sections such as lifestyle, skills, income, employment, consumption and saving behaviors and technology and recycling adoption.
Contact us: contact@isrcenter.com
FOLLOW US